Rise Design Studio has added a glazed extension to the rear of a house in London, creating a light-filled kitchen and dining room that opens up to the garden. 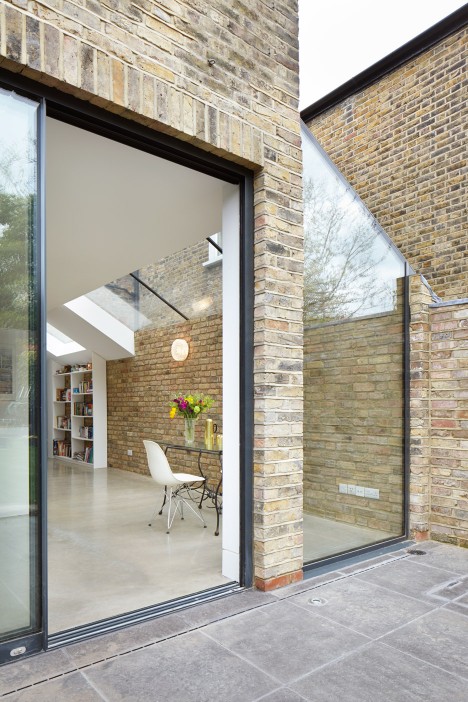 With the demand for contemporary house extensions continuing across the capital, the London-based firm designed the Burrows Road addition for a couple and their daughter living in Kensal Rise. 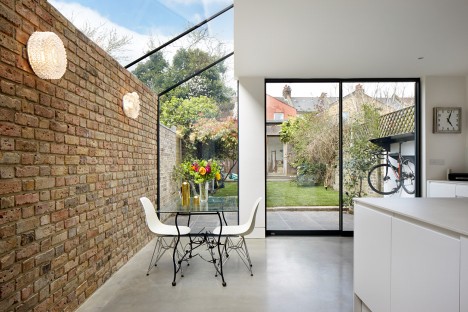 The intention was to provide the family with a large kitchen-cum-dining room at the rear of the mid-terrace house. 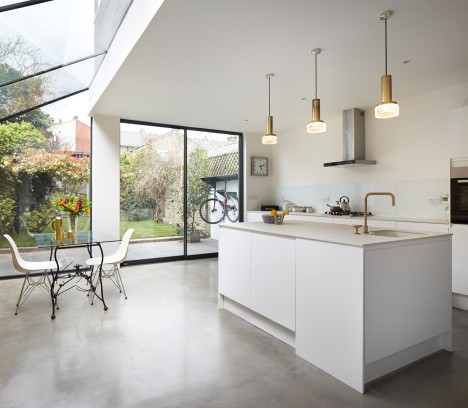 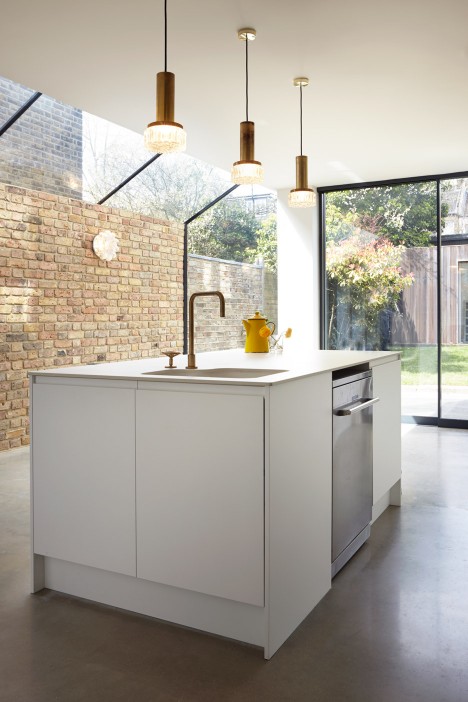 “The proposal was to improve the quality of light and chop up the existing disparate internal ground floor layout to allow for an open plan area and more fluidity between the kitchen-cum-dining room, television room and rear garden.”

The architects removed the side wall at the rear of the property and slotted glazing into the gap between the house and the site boundary wall, which has become a feature of the new space. 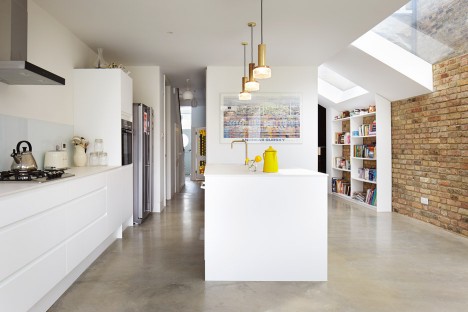 “The side alley becomes an internal space by way of a frameless glazed envelope which allows for views to the sky and rear garden from deep within the plan, giving the space an external character,” said Hill. 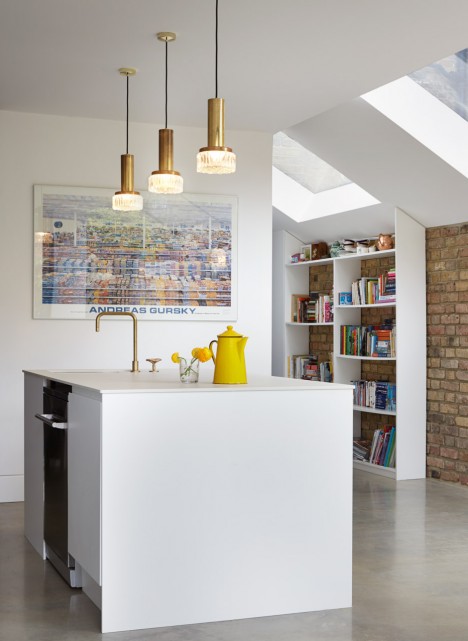 The external wall was heightened using bricks reclaimed during the demolition. It now supports a slanted glass roof, which bridges the gap between the brick structures.

The rear wall was also partially removed and the gap was infilled with large sliding glazed doors that connect the kitchen and garden. 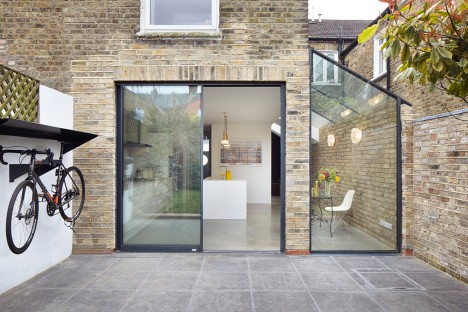 Inside, the fittings and finishes are kept simple. White kitchen cabinets are located on one side of the space, featuring an island with a brass tap. Pendant lights in the same material hang above.

The dining table is located on the other side of the room, beneath the glass roof. 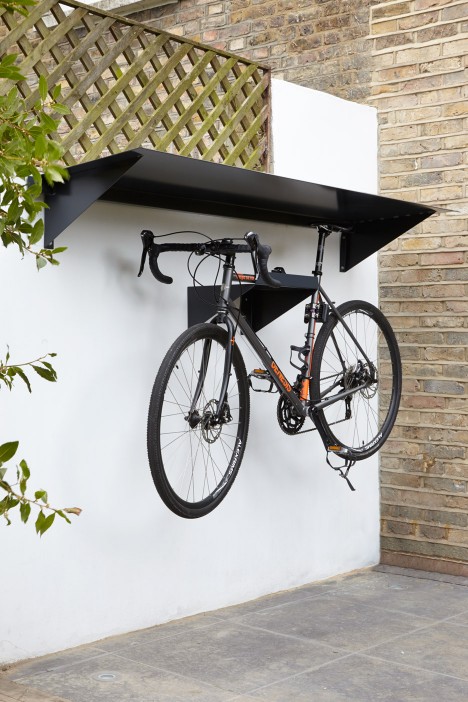 To improve the circulation, a new opening was created between the kitchen and a dark “cave-like” television room beyond.

Because of a rat infestation, all the original timber flooring had to be replaced. The architects chose four different types of surface to differentiate between the spaces. 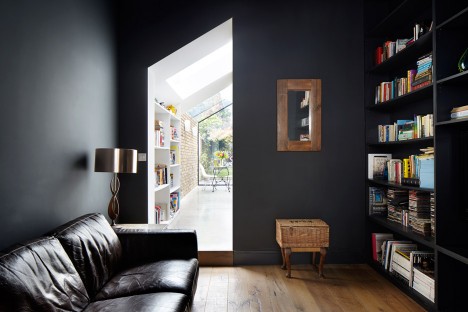 Encaustic tiles in the entrance hall are followed by distressed oak flooring in the front reception room and television room, while polished concrete floor in the open-plan kitchen dining area extends to a flamed basalt stone for the external patio.

This patio also includes a storage area for a bicycle, suspended beneath a steel shelf. Positioned on one of the existing boundary walls, it is painted to match the dark grey tone of the sliding door frames. 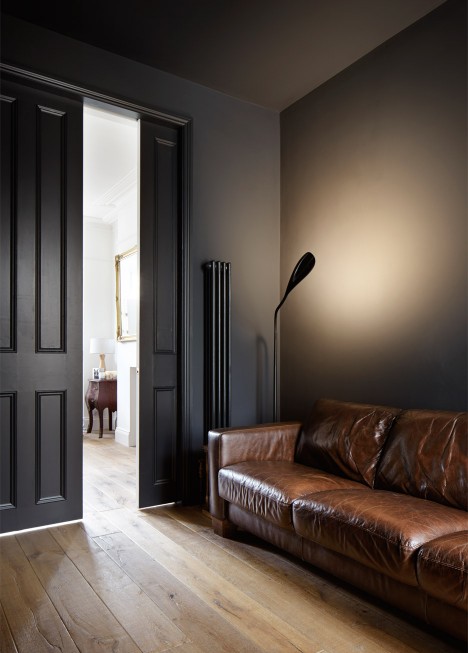 Rise Design Studio was founded by Sean Ronnie Hill in 2011. Previous projects by the firm include the renovation of a flat inside a 19th-century London mansion block.

Burrows Road is one of many modern house extensions completed recently in London, triggered by a growing thirst for contemporary design. Other examples include a property in East Dulwich featuring a three-metre-high pivoting door and an extension in north London with a butterfly wing-shaped roof.

First homes released for sale at new location in Aylesbury

The Gira Experience – From Designer to System Integrator